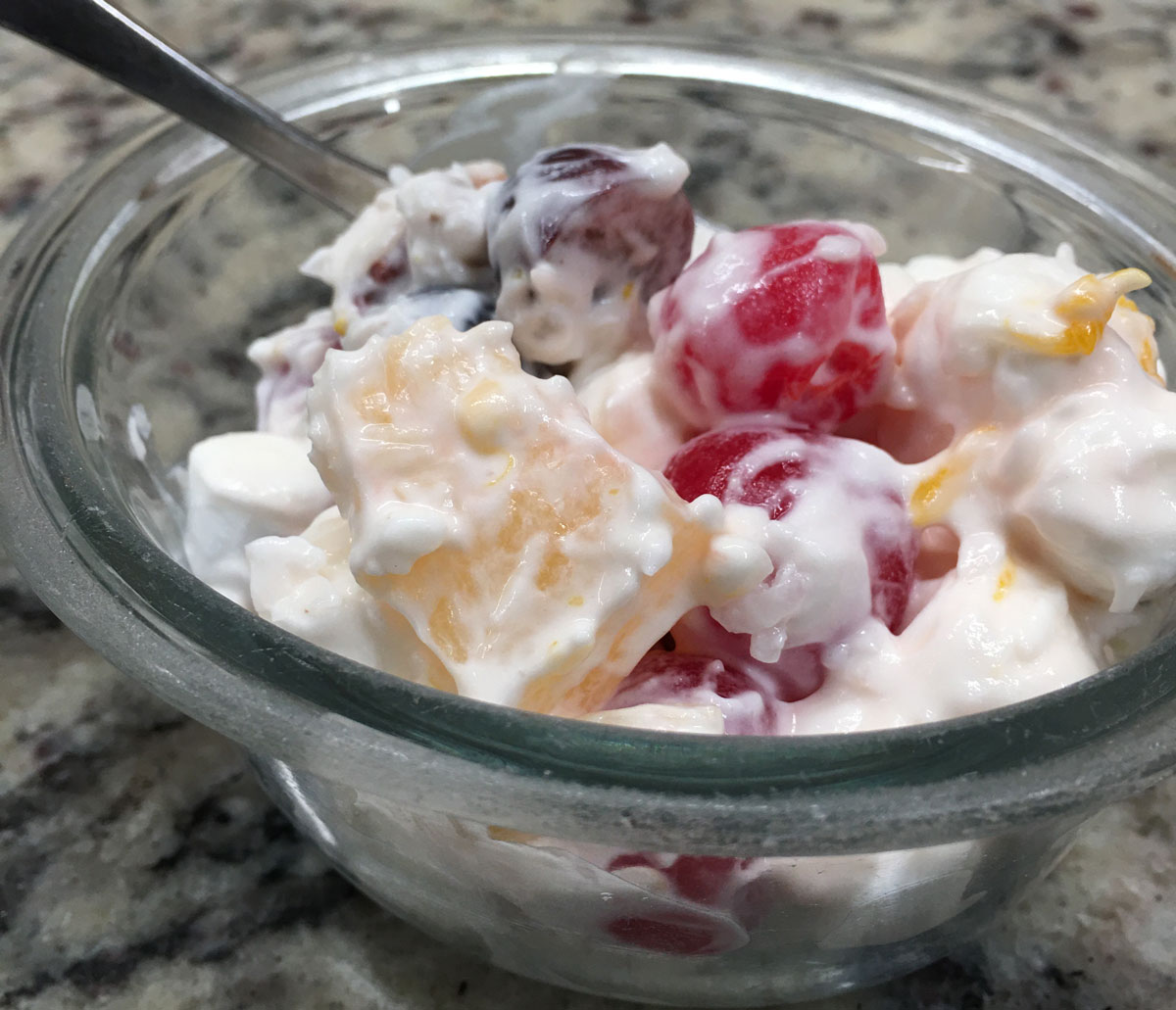 When most people think of salads, they think of a bowl full of green leaves, topped with colorful veggies and dressed with a tangy-tart dressing. However, that is not always the case. Some salads are made of pasta, some from fruit, and others are made of other vegetables like potatoes. Yet, still other recipes for salad, like this one, stretch the meaning of the word to unrealistic heights. 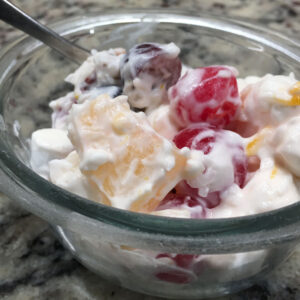 April Freeman
While the name may be deceiving, ambrosia salad is a tasty, lightly sweetened mixture of several kinds of fruit, pecans, and shredded coconut. It has a creamy, slightly tart dressing made from whipped cream and sour cream. Ambrosia salad has been around in various versions since the late 1800s, but we think that this version in particular will quickly become a family favorite.
Print Recipe Pin Recipe Add to Collection Go to Collections
Prep Time 20 mins
Cook Time 2 hrs
Total Time 2 hrs 20 mins
Cuisine American
Servings 10 Servings

This recipe for Ambrosia Salad turns the definition of salad upside down. This style of salad has been around since the late 1800s, and modern versions include whipped cream and various tropical fruits. By the time of the 1950s, ingredients like Cool Whip, Jello, and marshmallows were stirred into the so-called Ambrosia Salads. While often these recipes are included on the Thanksgiving buffet table right alongside the turkey, dressing, and vegetables, in actuality, it really seems to be more of a dessert than anything else. It shows up at family holidays like Easter, Christmas, and Thanksgiving. However, you will also see it at places like church potluck dinners and all-you-can-eat buffet restaurants. Whether you consider it to be a salad or a dessert, we are sure that you will agree that this dish is absolutely delicious. Including four different kinds of fruit, shredded coconut, and nuts all smothered in a creamy dressing, the flavors of this recipe are absolutely delicious. The earliest recorded recipes for ambrosia salad are found in cookbooks from the late 1800s. These recipes had little resemblance to the modern style of ambrosia. They generally included layers of tropical fruits, including orange slices, coconut, and sugar. Eventually, other fruits like canned pineapple became part of these recipes. The people of the time period served this dish only once or twice a year. Obtaining the tropical fruits could be expensive and difficult, so they saved ambrosia salad for very special occasions. As transportation of food became less difficult, the recipe became a bit more common and people began tweaking the ingredients. Until the early part of the 1900s, ambrosia simply served as a way of mixing exotic, tropical fruits. However, as other commercially available ingredients became more ubiquitous, they started to be included in the classic ambrosia recipe. The first ingredient to be incorporated was marshmallow creme. Eventually, the classic marshmallow hit the market, and it was also added to ambrosia salad. As the century progressed, items like commercially produced whipped topping began to be added to ambrosia. This whipped cream substitute is found in the frozen food aisle and often does not contain any dairy ingredients whatsoever. It is a mysterious manufactured food product that has hydrogenated oils and high fructose corn syrup in it. One thing that is unique about our particular recipe is that it does not include commercially created whipped topping. While many people would never consider making an Ambrosia Salad without a package of manufactured whipped cream substitute, just as many people try to steer away from the artificial flavors and ingredients that are in these products. They often prefer working with real food. Our recipe includes a full cup of heavy whipping cream that is beaten into a fluffy mound with just a touch of sugar. For some tartness, we also include a half cup of sour cream. Our list of fruits includes mandarin orange segments, pineapple chunks, and grapes. However, if you want to add other ingredients, it will be just as tasty. You can stir in sliced strawberries, mango pieces, or even some chunks of bananas. While this recipe is pretty good immediately after it is made, you will definitely want to put it in the refrigerator for at least an hour or two. The flavors of the fruit and coconut blend when you put them in the fridge for a bit, making it even more delicious.
Keyword Ambrosia Salad, Ambrosia Salad Recipe, Pasta Salad Recipe