If you ever see a bolt or screw with a hexagon or star shape, it is time to pull out your allen wrench or torx wrenches. While some may be unfamiliar with them, they are increasing in popularity so its time to add them to a well-appointed toolbox.

Many people are unfamiliar with the terms Allen wrench (also called hex keys) or Torx keys, but chances are you have some of these tools in your toolbox. Allen wrenches will often be part of an Allen wrench or hey key set, that is found on a ring, keeping them in the same place. Torx socket wrenches, Torx bit for drills, and Torx screwdrivers are also frequently sold in sets to provide a wide variety of sizes.

Those that have purchased furniture that needs to be assembled have certainly used these tools before, without knowing their name. Some retailers like Ikea include all the bolts and screws needed to complete the assembly and include the appropriately sized Allen wrench or Torx wrench with the hardware so the job can be completed.

What is an Allen Wrench?

An Allen wrench is an “L” shaped tool that has a hexagon-shaped cross-section, unlike traditional screwdrivers or Phillips head screwdrivers. They were developed by Allen Manufacturing Company, which is based in Hartford, Connecticut. This is where they got their name.

They also have a variety of other names that are frequently used for this tool including hexagonal socket, hexagon key, hex key, Allen key, Allen wrench. So all these different names, reference the same thing, the Allen wrench.

Allen wrenches are mostly used for small industrial products, musical instruments, automotive engines, and consumer electronics. They are also used in furniture assembly and for putting together some children’s toys. Chances are when you see those dreaded three words “some assembly required,” you will be using an Allen wrench to complete the assembly process.

The History of the Allen Wrench: 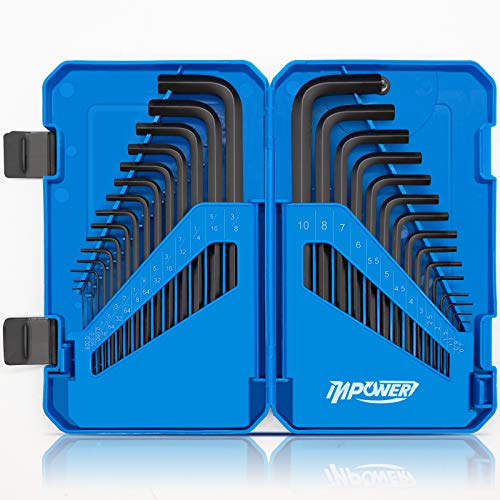 According to infobloom.com, many think that the Allen wrench was named after someone named Allen. This is not the case. The Allen wrench was manufactured early in the 20th century by the Standard Pressed Steel company. In 1943 it was trademarked by the Allen Manufacturing Company, and hence, got its’ name. When it was first manufactured, it was primarily used for repairing bicycles, motorcycles, and car engines.

Today the Allen wrench has many more uses around the home and is an important tool to have in your toolbox.

Allen wrenches come in a variety of sizes. Some of the most popular sizes for automotive and motorcycle needs are the 5/32 inch, 3/16 inch, and ¼ inch. The international Society of Automobile Engineers (SAE) recommends having some additional sizes on hand specifically for automotive needs, they include 3/32 inch, 7/6 inch, 1/8 inch, 9/64 inch, and 7/32 inch Allen wrenches.

See also  10 Energy-Saving Tips Worth Considering For Your Home

Allen wrenches are the most popular type of wrench next to flathead and Phillips screwdrivers. They are usually purchased in a key set, to accommodate a variety of different screw sizes.

What is a TORX® Key?

If you have ever purchased a drill bit set, chances are it came with flathead, Phillips, Allen, and Torx tips. You can tell Torx bits because they have a very unique shape. They have a star shape with six sides. Because of its shape, it is often called a star screwdriver.

Like the Allen wrench, the Torx key also has a variety of names like the Torx fastener, Torx bit, Torx wrench, and Torx key. This is to accommodate increased use by different industries. This also means that manufacturers are creating screw head bolts and other fasteners with the Torx design.

The Torx wrench is highly used in the automotive and motorcycle industries, much like the Allen wrench.

The History of the Torx Wrench

The Torx wrench is a trademarked type of screwdriver that has a star-shaped pattern, to fit the same type of screw. It was developed by Camcar Textron in 1967, primarily for use in the automotive industry. There are several different types of Torx wrenches today including Torx Plus, which first hit the marketplace around 1990 when the patent for the original Torx wrench was due to expire.

The new model has squared-off lobes, which allow for higher torque and better wear. The company now offers Torx Paralobe and Torx ttap wrenches as well.

See also  20 of the Best Quilting Websites and Blog

They were considered to be tamper-resistant and used in products like computers. Because Torx screws and wrenches were fairly uncommon, many computer manufacturers thought that most people wouldn’t readily have the Torx wrench available, and the computer couldn’t be tampered with.

Today, Torx wrenches have become more common and are being used more frequently by the construction industry. More sizes have been introduced due to the increased use of Torx screws and wrenches. Because of the growth in popularity, there are now star bit or Torx bits in drill sets because of the increase in both Torx head screws and Torx fasteners.

Where Can Torx and Allen Wrenches be Purchased?

With the growth in popularity of both the Torx and Allen wrench (or hex key), they have become readily available at most stores that sell tools. Home Depot, Ace Hardware, Amazon, and specialty tools shops all carry Allen and Torx wrenches. They are even available at most Walmart stores. They are typically found near the bike, automotive or small tool section of the store.

Some Torx and Allen wrenches that are manufactured primarily for automotive use, may need to be specially ordered or available only at automotive specialty stores.

Some may find Torx keys a bit harder to find, but more retailers are stocking their shelves with them because of the growing uses for them.

Are Allen wrenches and Torx keys the same thing?

No, they are two very different tools. The Allen wrench or hex key, as it is sometimes called, is a hexagon shape, that is why many refer to them as hex keys. The Torx key has a star shape. So if you are trying to use an Allen wrench on a Torx screw, it won’t work, and vise versa.

Is one type of wrench better than the other?

No, they perform the same function. Though when it was first introduced, Torx screws were very rarely used. Many computer manufacturers started using them for hard drives and other computer uses, thinking that so few people had Torx screwdrivers or wrenches that the computer would be tamper-resistant.

Where Can Torx and Allen Wrenches be Purchased?

With the growth in popularity of both the Torx and Allen wrench (or hex key), they have become readily available at most stores that sell tools. Home Depot, Ace Hardware, Amazon, and specialty tools shops all carry Allen and Torx wrenches. They are even available at most Walmart stores.

Some Torx and Allen wrenches that are manufactured primarily for automotive use, may need to be specially ordered or available only at automotive specialty stores.

Some may find Torx keys a bit harder to find, but more retailers are stocking their shelves with them because of the growing uses for them.

Infobloom: What is Allen Wrench

Car Bibles: What is Torx Wrench