Tuna is a popular fish to buy and very easy to find. Most of us thought that all tuna is the same, but many types of tuna taste and look different. Some types include yellowtail, Bluefin, Skipjack, bigeye, bonito, blackfin, and albacore. Albacore is a little different from the other tunas, which we will look at in more detail. 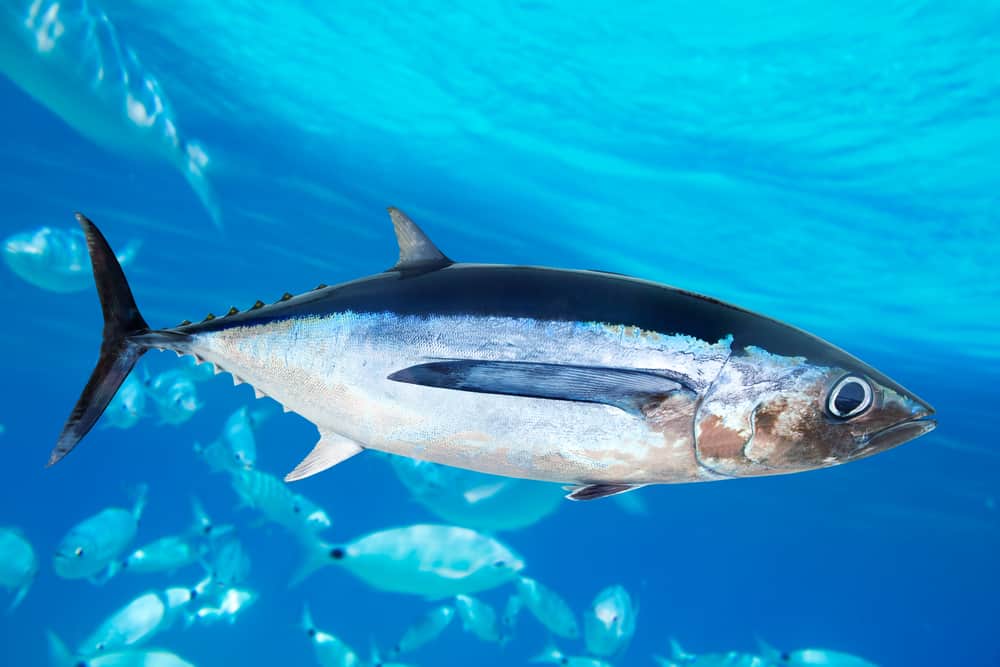 Albacore tuna is one of the smaller species weighing up to 80 pounds; it has a different coloring and a very long pelvic fin. Its meat is much lighter with a white pinkish color, so it is known as white tuna. Albacore has a milder flavor; it is higher in fat, meaning it contains more omega 3.

Table of Contents Show
What are the Differences Between Albacore And Tuna?
They Look Different
Difference in Taste
Cost Difference
Which is Healthier?
Where Can These Tuna Be Located?
How Long Do They Live?
Conclusion

What are the Differences Between Albacore And Tuna?

Tuna is a species of fish; they are quite a large sea fish, albacore is classified as a type of tuna, but it is a bit different from the other tuna species.

Albacore tuna does look different from other tunas, the main one being that it has white meat; because of this, it is also known as ‘fancy white’ and ‘white tuna’. Albacore is very white, but its color is more of a white to light pink. The other tunas, such as yellowtail and Skipjack, have a darker color, a tan-ish pink.

Albacore tuna is one of the small species of tuna that usually weigh around 80 pounds, whereas, for example, the yellowtail and bigeye tuna weigh around 110 to 154 pounds. The biggest tuna species is the Atlantic Bluefin weighing 485 to 550 pounds, and the smallest species being the Skipjack weighing around 41 pounds.

Albacore tuna could be found in the store as a solid pack of tuna fillets, large pieces of fish, or even as chunks of fish. Other tuna types may be packaged as chunks; this looks like small pieces of fish packed together in water or vegetable oil.

However, the yellowtail has a metallic blue color with a silver stomach and a yellow-greenish color around its lateral line. Interestingly, the juvenile albacore looks similar to the bigeye tuna, sometimes being mistaken for this species. As you can see, this is looking at the difference between two different tuna, but all of these fish have different coloring, features, sized fins, and bodies.

The other tuna species flavor is more flavorful compared to albacore, most having a stronger rich flavor. Albacore has more of a mild fish taste, and this would be easier to eat for those that don’t love fish.

Tuna, in general, is not an expensive fish compared to other species such as salmon, which is probably why so many people commonly consume it. Albacore tuna is quite a cheap tuna to buy, especially canned albacore tuna. This may be different in other parts of the world, but it is slightly cheaper.

It costs about 45 to 50% of what yellowtail costs. The most expensive type of tuna is Bluefin, and this is because it is endangered and harder to catch since it swims very fast. Bluefin has also become extremely popular; as the demand increases, the supply decreases, so it is more expensive.

Where Can These Tuna Be Located?

Tuna species can be found throughout the world’s seas, some types in different parts to others. The albacore can be located in tropical and temperate waters similar to the Bluefin tuna. The juvenile albacore is mainly found near oceanic fronts, whereas the adults live to depths of 380m in the ocean.

Other tunas such as the yellowtail, Skipjack, and bigeye are found in the tropical oceans. Tropical ocean regions include the Caribbean Ocean, Indian Ocean, and central parts of the Pacific and Atlantic oceans. Temperate ocean regions are the Tropics of Capricorn and Cancer and the North and South polar areas on the globe.

How Long Do They Live?

Interestingly the different types of tuna live up to different ages, some living double the age of others. Bluefin and albacore live till similar ages, Bluefin being the oldest of up to 15 years and albacore tuna living up to 12 years of age. The yellowtail, Skipjack, and bigeye do not live as long as around seven and nine years of age.

It isn’t easy to decide which tuna is best in terms of flavor because everyone has different preferences. Bluefin tuna is loved by so many people, especially in sushi, and the other tuna besides albacore is enjoyed for its strong, rich flavor.

People who are not big fans of the strong fish taste would prefer albacore tuna, which is enjoyed as canned tuna. In terms of health, they are very similar, but albacore will give you more omega 3 fatty acids, which is ideal. All around, albacore or white tuna is more preferred by many people compared to the other tunas