Broccoli has plenty of vitamins and minerals. Often served raw, it also tastes good when cooked. Our recipe for Air Fried Parmesan Broccoli with Garlic is worth the try. 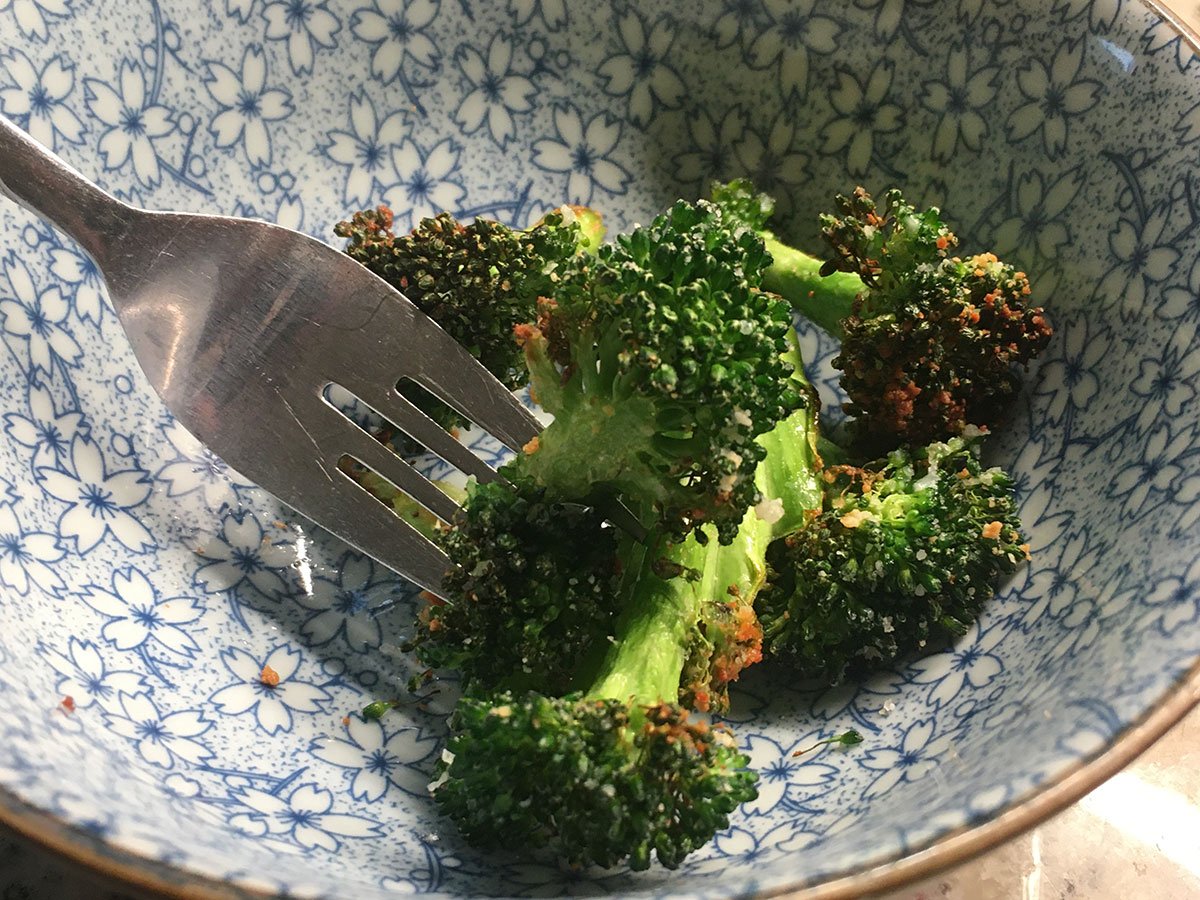 While broccoli has been cultivated for human consumption since the time of the Roman Empire, farmers in the United States have only been growing this nutritious vegetable since the 1920s. Immigrant farmers from Italy first grew this green veggie in California, and they began shipping it eastward by railroad on ice in 1924. They marketed this veggie to other immigrant Italians in Boston who really loved it, since they had eaten it in their native country of Italy. However, it was not until after World War 2 that broccoli began to grow in popularity in the larger population of the United States. Currently, the United States is the world’s largest producer of broccoli. 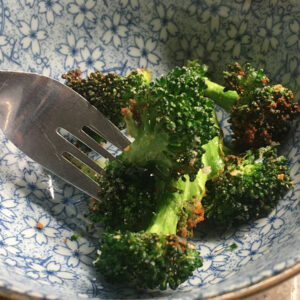 April Freeman
A delicious, nutritious recipe, Air Fried Parmesan Broccoli with Garlic cooks up fresh and tasty in just a few minutes. If you are looking for a way to make broccoli taste good without involving commercially manufactured ranch dressing or a sodium-laden cheese sauce, look no further. This is a perfect side dish to go along with a roasted chicken, meatloaf, pot roast or some other meat. With the savory flavors of pepper and garlic, and the crispiness of roasted green veggies, we are sure that you will enjoy our recipe for Air Fried Parmesan Broccoli with Garlic.
Print Recipe Pin Recipe Add to Collection Go to Collections
Prep Time 5 mins
Cook Time 10 mins
Total Time 15 mins
Cuisine European
Servings 6 Servings

Broccoli is actually the flower of a plant. Both the stalks and the flowers (florets) of the plant are eaten, sometimes raw and sometimes cooked. While they are edible, the leaves are bitter tasting and most people discard them, although some cooks do use them. Broccoli plants prefer cooler weather, and it is often grown in the Northeast of the United States. In other places, broccoli is only grown in the early spring or late fall months. During the summer, the broccoli plants become bitter and harsh tasting. There are three major kinds of broccoli. The calabrese variety is the most familiar to American consumers and has large, gray-green flower heads. Sprouting broccoli does not have large heads, but instead, the plant generates multiple smaller florets on smaller stems. Romanesco broccoli is the most unfamiliar to most American diners. This interesting variety has numerous cone-shaped heads that are a yellow-green color. There are also white and purple varieties of the Romanesco version of broccoli. Broccoli is a powerhouse of nutrition. This crispy vegetable is low in calories, with just 30 calories per one cup serving. However, it also has plenty of fiber, having 2.5 grams per serving, and because of that, it is extremely filling. Because of these qualities, broccoli is a popular food for people who are trying to lose weight. It is loaded with Vitamin C, providing 120 percent of the recommended daily allowance for this vitamin. As compared to most vegetables, broccoli has a relatively high amount of protein. A one cup serving has 3 grams of protein, which makes up 29 percent of the vegetable’s dry matter. Broccoli also has plenty of other vitamins and minerals. Broccoli has high amounts of Vitamin K1, a vitamin that helps assist in blood clotting and promotes bone health. Folate is also found in broccoli. This vitamin helps pregnant women avoid birth defects in a fetus and also helps promote healthy cell growth. Potassium and manganese both help with cardiovascular health and are present in broccoli. Broccoli also has a component called sulforaphane in it in high amounts. This sulfur compound may help improve illnesses like diabetes and obesity by improving the regulation of blood sugar levels. Sulforaphane is also thought to be a cancer fighting component that helps fight irregular cell replication in the human body. This compound is also indicated in studies to help fight osteoarthritis by promoting joint health and cartilage maintenance. Finally, some scientific studies seem to indicate that the sulforaphane compounds in broccoli can help improve mental health, particularly illnesses like schizophrenia. Broccoli is often served raw, sometimes accompanied by dips like ranch dressing. It is most nutritious in its raw form. However, steaming, roasting, or stir frying it actually keeps most of its nutrition as well. The worst thing you can do with broccoli is to boil it, since cooking it in water leaches much of the nutrition out of the vegetable.
Keyword Air Fried Broccoli Recipe, Air Fried Parmesan Broccoli with Garlic, Air Fried Parmesan Broccoli with Garlic Recipe